When you craft a message, you generally have a target, or audience, in mind. You probably also have an agenda, or goal, that you wish to achieve, such as awareness, education or a call to action. And both the message and the agenda are typically driven by both your own ideas and those embraced by your target audience. Your message must match your audience, or it’s difficult for them to embrace it.

If all works well, your message is received by your audience and your agenda and goals met by their actions and response. But we live in the age of pervasive communications where your message has the ability to go viral, to spread like wildfire around the globe – not just through one medium, but through many. It may be shared on dozens of different “new media” social networking sites, it may be emailed around the world, it may even be featured (or the viral spread of it) in traditional media (broadcast, print) or their online hybrid counterparts (tra-digital media).

“Reaching an audience beyond your intended audience has consequences”

In the end, your carefully crafted message goes well beyond your target market and reaches a much larger group of people that you never intended to be part of your audience. If you are trying to build/energize a community, you may find yourself with a mob, on a global scale.

Take the case of the Kony 2012 campaign. It’s a documentary film about Joseph Kony and his Lord’s Liberation Army (if you haven’t seen it, you should). Starting in Northern Uganda, Kony (a man  indicted for war crimes by the International Criminal Court) has, over a period close to 30 years, maimed, killed and enslaved children (some put the estimate at 66,000) into military service to support his cause. His reign of terror has moved well beyond the Ugandan borders into the Democratic Republic of Congo, the Central African Republic, and the South Sudan.

The documentary was created by the Invisible Children organization with what appears to be all the right intent, including a humanitarian agenda, a desire to raise awareness of, and funding for, those who suffered at Kony’s hands, and to ensure (from the Kony 2012 website):

The target audience of the documentary, as evidenced by both the narrative and the logo (featuring the U.S. Republican and Democrat symbols), are centered in the U.S. and the political arena. And within that target, it had its desired result. But it didn’t end there.

IT’S CALLED VIRAL FOR A REASON

This documentary, and the horrific crimes it highlighted, hit such a sensitive nerve with people (within its intended audience) that they leveraged pervasive communications to do what humans have always done since the beginning of time: THEY SHARED!

What started as a focused, but relatively unknown movement, went viral as the Kony 2012 documentary began to spread throughout the U.S. and the world. The Twitter hashtag #kony2012, for example, became a top trending item on Twitter at the peak of the viral distribution while Facebook showed an equally amazing number of shares and likes for the documentary (not to mention the publicity and momentum it gathered when national and international traditional media outlets began reporting on the viral spread of the documentary). In the process, it gained a level of global fame well beyond the producer’s original expectation as well as a global audience that didn’t fit the “target profile” of its original audience.

The result? A response that the producers were unprepared to handle (or at least well beyond what they expected to have to deal with). With increased awareness came both massive support (good) and increased scrutiny and negative pressure (bad). They also faced a global audience that was viewing a documentary film that wasn’t intended for them in the first place (including those in Northern Uganda). Yes, it was intended to help them, but culturally, it wasn’t intended for them to consume.

WHEN MESSAGES MEET THE WRONG PEOPLE

The western-oriented message simply didn’t fit the various non-western cultures that had access to the Kony 2012 campaign through its viral spread. While it has done a tremendous job at raising both awareness and funds to help Kony/LRA victims, it also became, for many, the wrong message for the wrong people, leading to questions about intent, accuracy and a resulting impact that was very different from the original, anticipated goal.

What started as a unified U.S. base of positive support has also led (through increased scrutiny) to those (and it is their right) who claim it oversimplifies a very complex issue, and takes mind-share away from other, more pressing problems that Ugandans, and others in Africa, face today, such as the debilitating nodding disease that is striking an alarming number of children in Uganda and the ongoing slave trade in Mauritania.

It has also had a direct, non-desirable, impact, and intrusion, into the personal lives of those involved in the creation of the documentary.

THE IMPACT OF PERVASIVE COMMUNICATIONS

This phenomenon will likely become increasingly common – especially when the primary means of distribution is social media – a content distribution & sharing medium that by its definition and role in pervasive communications knows no borders. None.

If an idea, a documentary, or a story has the ability to generate a massive emotional response (either positive or negative), pervasive communications allows it to spread – to go viral -and there isn’t any way to stop it (again, this includes traditional mainstream media, digital/social media and tra-digital media). If the consequences of this viral spread are unanticipated, what begins as a proactive messaging activity can quickly become a reactive damage control operation.

What does this mean for cause-based content in the future? Ultimately, it places a much greater responsibility on choosing the “right” channel(s) within our pervasive communications network, as well as crafting messages that are either by their nature self-limiting or have universal appeal. The case could also be made for non-cause (i.e., commercial) content as well – pervasive communications doesn’t discriminate in its ability to impact a message, regardless of media.

Either way, what the Kony 2012 phenomenon has shown us is that the rules of content distribution that applied only a few short years ago no longer apply. It is a different world that we live in today, and we’re only just now beginning to understand the rules.

Barry Diller has made billions off of the Internet. So when he said that all Internet content of value would be “paid” content within five years I thought I would agree. But I just can’t buy his idea of micro-payments for all types of valuable content (content = information). First off, I have to state that I’m damn impressed by the amount of money that Mr. Diller generates each and every minute on the Internet (his firm, IAC, uses around 30 sites, such as Ticketmaster, Match.com, Citysearch, and LendingTree, to generate over $1.5Billion a year). With that type of street cred, it’s hard to argue with him. And yet, I can’t help but disagree with his statements that “everything of any value” on the Internet would be fee-based within 5 years (you can read a good summary here on Jon Fine’s blog at BusinessWeek).

No, he isn’t wrong about his core statement – I agree that “most” valuable content will be fee-based. But I think he goes astray with his timeline (5 years) and the notion that micro-payments are going to be required for value-added Internet content. 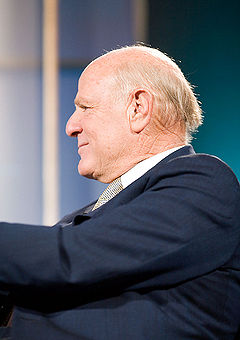 Follow me with this (I’m taking a leap of faith here):

1. I do not believe that there is that much “valuable” content on the Internet today (as a % of total content). Sure, there is a tremendous amount of “interesting” content out there (ranging from news to blogs to information services), but not much of it is really “can’t live without” stuff – it lacks the research or analytical content/commentary to add value. A CNN (or any) news feed is of interest, but “analysis” of the news – what it really means to me, my family or my business – is of real value.

2. I think that much of the really valuable content on the Internet is already being paid for (interestingly, Barry’s $1.5B is not a particularly good example, and I don’t see consumers ever paying to use Ask.com as it exists today). Look at sites like the Wall Street Journal ($1.99/month), or the litany of research and analytical/commentary sites that have successfully migrated their subscribers from “hardcopy” business models to “Internet subscription” business models. Even “interesting” information often comes with a price (in the form of advertisements). [There will always be some type of subsidized content at a reduced cost – look at the Fox News CableTV/Internet blend for a good example]

3. The Internet is overloaded with “not valuable” content, and it is only going to get worse before it gets better. As much as I like the extremely varied content available online, there is simply too much of it out there today, and much of it is repetitive news-based information that varies little from site to site (suppose 90% of all news is repeated on 90% of all sites with only about 10% added value). At some point, people will be more inclined to pay for content that they consider “quality” or reliable. [Before anybody jumps here, let me state that focused blogs and community sites like Wikipedia will continue to be one of the best no-pay values on the ‘Net]

4. Valued information and information applications will merge even further. To really make information valuable, you need to be able to apply it in an actionable manner, and that means having an application that makes the data usable (and re-usable). E-Trade, MotleyFool and SalesForce.com are good examples here.

5. Micro-payments are like the Holy Grail (they are better in a Monty Python movie than in reality). There are many who argue that micro-payments (between 1 and 10 cents) are the next logical step, citing the 99 cent availability of music via sites like iTunes. However, payments at iTunes are essentially a restructuring of the purchase process for a CD, allowing the consumer to purchase individual pieces of the CD (#tracks * .99 = cost of full CD) – a model that I just don’t see translating to the news or journalism markets where people would micro-pay to read individual articles). Plus, the music that we purchase is tangible (we save it and listen to it over and over again, something you can’t always say about a reading a news story).

So what is the answer?

Valuable content is already being paid for today, and that isn’t going to change any time soon. We might find that the price we are willing to pay is a good bit lower than sites would like to charge (and those sites that cannot live with that fact won’t live long). But I don’t think that micro-payments (which will continue to evolve and be a part of future payment systems, especially for tangible goods like music) are the ultimate answer or even necessary at this point. Rather, I believe that low-cost “micro” subscriptions will likely be the rule for most “non-music/video/commodity” content. I would even rank low-cost multi-site or limited-view subscriptions as more likely than micro-payments.

So Barry, you are right, most of the “valued” content on the Internet will be paid for. We just won’t have to wait 5 years and I don’t think that micro-payments will beat out micro-subscriptions for this type of content.