Robert Scoble kicked off his new web endeavor (Building 43) this week, including a great interview with Mark Zuckerberg, the founder and CEO of Facebook. But as I watched, there were a few questions that kept leaping forward, such as “is that an RC helicopter in the background?”

First off, kudos to Robert Scoble for Building 43. Great idea, nice design – I like what I’ve seen so far.

And the kick-off interview (see the video below – go to 7:12 for the RC) with Facebook’s founder is a very good, relevant choice (and let’s face it, Facebook has class, MySpace not so much). But as I listened to the interview, during which a very open and interactive social networking model is presented for blending personal and business interests (including a nice set of points on the importance of knowing who your friends know), there were a few questions that kept leaping forward.

So take a view – it’s an interview worth watching twice (just to follow the flying helicopter in the background). 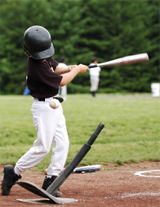 My 6 year old son started his foray into organized sports this year with T-Ball. There are 13 kids on a team and everybody bats every inning (they play three). For most of the players, it’s the first time they’ve ever worn a team uniform (my son’s team is the Raptors). For others, it’s the first time that they’ve ever really swung a bat, or tried to catch a ball in a glove. It’s a learning experience for all of them, and more than anything else it’s fun – even when all 13 of them converge on the ball at the same time.

I’m fortunate to be able to help coach the team. I can’t imagine not being there at first base to help teach them the basics of a game that I don’t even fully understand.

But even though we’re not playing competitively at this point (we don’t count runs or outs – that will start next year after they’ve learned the basics), that still doesn’t stop at least half the team asking me every game “how many runs do we have?” or “did we win today?”

And that’s where we take a leap into Social Marketing.

I had the chance to query two companies this past week about their plans for establishing an active online presence in the “social media/network” space (think everything from Twitter to Facebook to LinkedIn, etc.). Both of these firms are well-established with brand names that are known beyond their own industries (i.e., they are not small or in the startup phase), and both have competitors that are already moving into the social space.

Interestingly, neither of these firms are particularly active in social marketing today, but for very different reasons. One has dabbled a bit in the space, but said that they couldn’t find a single instance where they had made money off of their efforts. The other has yet to step into the space at all, saying that they don’t yet understand the market and, while they have several different plans, they don’t want to move on anything until they fully understand the market and can figure out which of their plans is the “best” approach to take.

That said, my response to both firms was pretty much the same: marketing into the social space today isn’t really about scoring sales, it’s about learning the game. If you don’t play today, you won’t be able to play tomorrow, and let’s face it, social networks, as a “target”, are still an emerging opportunity for most industries. I don’t think that anybody has solved the complete equation for how it will provide a consistently positive return on investment over the next couple of years – even the social network firms are struggling to solve the positive cash-flow issue themselves.

So at this point, the social space really isn’t about making money, it’s about learning and evolving and keeping pace with the rest of the universe.

Fortunately, the cost of being active in the social space today is relatively low, with the ROI being experience and consumer mind-share – two clear positives in my book. Taking it a step deeper, I can’t tell anybody that they will significantly grow their market share by actively marketing into (or participating in) social networking today. But I am fairly confident that those firms that don’t play today will have a difficult time playing tomorrow, and could very likely lose overall market-share by simply not keeping pace with their competitors in terms of generating positive market exposure in what is clearly one of the fastest growing “emerging” target markets.

So there you have it. T-Ball and marketing into social networks today. It’s that simple. Neither will guarantee that you score today, but both are a necessary, and potentially fun, learning step to playing the game right tomorrow.

If it doesn’t, it will likely cease to be. But they can’t charge YOU…

A short while back I wrote about why Twitter had to fundamentally shift its model in order to generate positive cash (not to mention ROI). This should be considered a flat-out given.

Over the past few days, there has been much talk about a couple of recent interviews where Twitter co-founders Evan Williams and Biz Stone have discussed some fairly unique ways that Twitter might make a buck or two (and you can’t begrudge them that). [check out TechCruch’s interview, the NYT’s Bits Blog, TechSassy’s commentary or just search Mashable for “Twitter to charge” for an amazing array of money-making options]

Unfortunately, one of my favorite mottos “Viral info can spread just like a virus – this is good. But beware the mutation of information.”, has proven once again to be all too true. There has been an extremely rapid and (unfairly) anti-Twitter backlash against these reports, such as (all real twits culled from the thousands that I got from a “twitter and “charging” search):

But before we all move to condemn Twitter, let’s take a look at some basic givens:

So, just where will the money come from? Tossing aside all the talk of “reality TV” or some type of “Twitter-in-the-News” type of program (which might add some revenue, but not enough “ad” revenue to satisfy Twitter’s backers), the most likely source is from corporate-sponsored accounts (where corporations actually use Twitter for things like direct sales, marketing and customer support) or from expanded marketing of their API system. Why?

First, advertising (with open APIs) simply will not work. Unless they are willing to close the Twitter API’s down and stop all the Twitter tools out there from accessing Twitter – like my own fav TweetDeck , Tweeters will simply move to alternative interfaces (unless Twitter replicates ALL of these functions in-house ala Facebook). Sure, plenty of users still use the “web” interface, but the existing interface is underpowered and doesn’t do anything for mobile apps (which are lousy handling advertising anyway).

Second, Twitter has already started to tighten up its APIs and has every right to charge for access to “valuable” assets. Sure, this might mean less alternatives, but Twitter deserves to survive as more than just a $55M experiment.

Third, corporations already recognize the fact that they must play nice with social media networks if they want to have a chance to survive and thrive in the future. The challange here, of course, is in coming up with a definition of just who a “corporation” is – especially given the large number of user accounts that have already found a way to make money off of “marketwing” to other Twitter users.

Finally, I just don’t see a viable market for charging “power” users (ala LinkedIn, which relies much more heavily upon a professional user base). If they go that route, it will just make it easier for firms like Facebook or (I hate to say it) Google to replicate the model.

Ultimately, I may be wrong and way off base. But my guess is that all these “free” add-on applications will start to feel the financial crunch and corporations will be charged to create their own “Twitomains” on Twitter. And no, Twitter will not start charging rank-and-file users anytime soon.