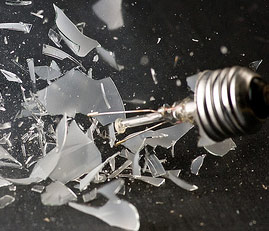 Over the years, as an analyst, advisor and even as an entrepreneur, I’ve heard the phrase “Our strategy is to disrupt

Why? I’ve always believed that the fastest way to success is to avoid trying to knock somebody off the ladder and, instead, build your own ladder. You control your future. You shape the market. You let the people on the other ladder pursue their evolutionary strategies while you quietly create a revolutionary strategy.

THE RELATIONSHIP BETWEEN DISRUPTION AND INNOVATION

To be clear, there is a definite relationship between “disruption” and “innovation” not to be confused with Clay Christensen’s “Disruptive Innovation”. Often, they feed off of each other – one leading to the other (or at least providing an opportunity for the other to take hold).

Similarly, disruptions within a market (or a vendor if they dominate that market) can often provide an enhanced opportunity for new and innovative vendors and products. The more disruptive a market has become, the greater the opportunity for innovation to create a new, better alternative market. But there are differences.

Disruption, like the stuff that hits the fans, often just happens. It can be caused by any number of different conditions. Disruptions to supply chains. Technological advances. Corporate mismanagement. Natural disasters. All can result in a market (and its vendors) being disrupted. In the extreme, the disruption devolves into a state of chaos – and chaos (while it may offer opportunity for those able to restore order) is usually not a characteristic of a market you want to enter.

To this last point, the notion of “disrupting” a market of a vendor to gain a competitive advantage is more often than not simply the wrong approach (a great example being the often asked question in the analytical/advisory space: “Why hasn’t anybody been able to disrupt Gartner’s business model”). To disrupt an entrenched vendor’s business model means to disrupt their market, which may be extremely difficult/impossible to achieve without disrupting your own chances of stepping in to take advantage of the opportunity (an issue we’ll discuss in Part II).

Innovation, on the other hand, is more often the result of a “spark” or idea that transcends the products, services and strategies of an existing vendor or market. It creates something new: its own ladder. Rather than competing head to head against an existing market or vendor, it offers an alternative that, if done correctly, is often unnoticed by other vendors. It doesn’t (initially) compete for the same budget, nor does it require a “magic quadrant” or an “us vs them” comparison.

A true innovation stands alone – it is its own product and market replacing the need for existing products and markets. It obsoletes prior structures (an issue we’ll discuss in Part III) and represents – in both the short- and long-term – a new market opportunity.

While a new innovation may ultimately compete for overall corporate/consumer dollars, it is often differentiated enough that it can initially sit along-side existing products and simply blend into the landscape. In fact, the best innovations are the ones that existing market players don’t deem as viable – very different from a product evolution that may be considered cannibalistic if they were to implement it themselves.

Taking it deeper, a true innovation will ultimately replace the need for existing products, vendors and even markets. All though not common, the “existing products” *may* not actually exist (although the need for them may – the case of the impractical market), or if they do exist, they *may* under-perform or not currently meet market demand (something that may not be obvious or intuitive to either consumers or vendors).

Take, for example, the iPhone (introduced only five years ago in 2007). In and of itself, it wasn’t a true innovative product, but rather an evolutionary extension of existing multi-media phones (like the Blackberry). But the Apple App Store – when combined with the iPhone (in 2008) – was a true innovation. It created a new market, obsoleted others and forever changed the way that hundreds of different products (as applications) were brought to market.

In the next few posts we’ll discuss the different types of disruptions and innovations that commonly occur, and the risks and rewards that accompany each (here’s a thought to ponder: most disruptions – especially man-made – offer more risk than reward, while most innovations offer tremendous reward with very little risk).

Have a different perspective? Toss it out. There are plenty of opinions on this subject and I’m looking forward to the debate.

Note: Post updated to highlight and clarify distinction between “disruption and innovation” and “Disruptive Innovation”